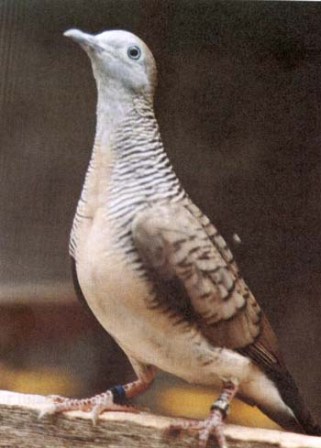 Keeping perkutut (Geopelia sp.) as pet is a quite prestigious hobby in Indonesia. Javanese folk has been doing that for centuries. The number of perkutut lovers itself has increased year by year, from common people to the nobility ones. Until these days, a tradition like sitting ensemble and hear this bird sings while enjoying a simple serving still flourish. Maybe you ask me then, what is so special about this 0.14 pound creature?

It brings luck for the owner, they said. And could hear the angels! In normal condition, perkutut sings with a peacefully voice within daylight only. So when it sings in the middle of dark night, which is very rarely happens, people believe that's when an angel is coming around.

This magical bird is also believed has a higher level than other birds. One of the reasons is because perkutut's feces or carcass does not smell at all. That carrion dried up directly and shattered itself after months, with no trace. Exactly like a holy man.

That's why perkutut has many fans. As I observed, there are at least two groups of perkutut's lover. The first one comes from hobbyists. They had started it all from their own need fulfillment, and continued to a contest in broader scope. Those devotees, by consequence, have to polish their gamecocks time after time following the trend if he wants to win the contest.

The second lover group is people who mere possess perkutut. A lover who believes perkutut's invisible power included in this group too, because his hobby almost certainly wouldn't continue, a.k.a. stagnant. There is also man who dues to professional reason he became a devotee. A birds' merchant, for example. He directed his customers to adore perkutut, of course for bringing his bird collections in demand.

No matter what the motivation of Koong Mania (perkutut lover), they surely desire some nice sounds of his bird, so it would touch the highest possible price. Did I already say that keeping perkutut is not a cheap? A market price of an excellent perkutut reached ten thousands US$ in Indonesia (when 1 US$ = 10,000 IDR).

Compare it with prices of other expensive pets in the same country. For the mature one, an Estuary Crocodile (Crocodylus porosus) sold by US$ 250. An Albino Python Molorus Bitatus was instead US$ 100.

Why is perkutut price more spectacular than those reptiles (in the same condition perkutut's breeding is far easier)? I think this is a question of culture, and beliefs obviously. Beside, the expensive factor of perkutut is the quality mere, in this case are the voices. Listen it sings when you're far away from the tumult of civilization, you'll find a peace in body and soul.

As I read, perkutut produce three kinds of sound (female bird sounds scarcely and not so nice as male one). First, Primary Sound that heard like "claw-c'tac-koong". It is functioned as a social status determining in their circle, for attracting sex opponent, also notified territory. Secondary Sound heard like "claw-claw-claw". This is used to express its lust to the beloved. And the last, the sound that heard like "clath-clath-clath". Since we do not know yet what it is for, we named it Tertiary Sound.

What else the unique of perkutut aside from voices? Well, I don't know whether these are important, but perkutut can rotate its neck 360 degrees, just like the owl. Its vision is also sharp and easy adapts. This bird that has been called Nukhao Chewah by the Thai has two eyelids: Normal ones, and transparence ones to protect them from the rain and dusts when flying. 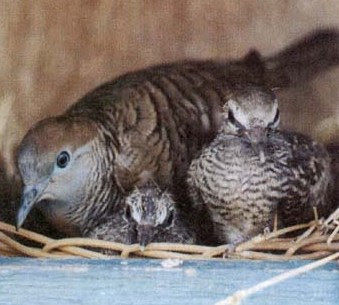 If you interest in detail about perkutut, here I put its classification in the international biology's lexicography.

In wide world, there were 41 clans of the Pigeons. They have centered disseminating only at Australia and Southern East Asian. Columbidae family does not recognize any polygamy/polyandry in their life, they have nature fidelity. On a period of copulation they lay just two eggs.

Generally its quills grayish brown, there are white freckles on the wings, and the skin around its eyes is red color. It is about 7.6 inches in length. This Freckles perkutut has been domiciling in Central Australia and North Australia.

Yayah had few, but then they died. They are exotic-looking but were not tough enough. They sing badly, in my opinion, like the groan of owl.

Its back is stripe dark, the chest and neck color are grayish blue, the shoulder and nape are copper color, beneath side is rose-apple color, and its wings have very brown stripes.

This perkutut whose length around 11 inches has domiciling in North Australia with Northern East Australia for G.h. humeralis subspecies, and Indonesia (southern Papua) for G.h. gregalis.

Its head and neck's color are grayish blue, around its eyes is greenish, while the wings are so brown, and its length is about 9 inches. This is the species that commonly contested in Indonesia. This stripes perkutut still have many subspecies, i.e.:

Not different from others eminent Colombiformes, perkutut's foot has also four fingers which each has sharp toenail. Three fingers are at front, and another is at back. It uses them for roosting on a branch, not for walking, because they would prefer to fly (just the same as human, isn't it?)

At their real habitats, perkutut inclined life in a pair. They have usually seen at village places such as grass plain, garden, farm or home's yard near the forest. This productive fauna was often being caught sunbathe whilst ‘comb' its quills. Its meals seem like seeds of grasses, turmeric or corns. No wonder, untamed perkutut's voice almost always sounds wild.

But no matter how wild it is, you can approach this avis to few meters close. You can even catch it by hand if you want to! Just do it slowly. Because when it felt threatened, it would fly to keep at distance, even though it used to be not so far.

Like any other animal, perkutut has own way to call its couple. This bird whose eggs as big as marble will shout a short repeated sounds (Secondary Sound) along with nodding of head and lifting of tail. In majority, wild perkutut has proliferated on January-September. In this session, they began compiling flat and thin nest on bush or low tree.

You may help it build their nest with casuarinas leaves or else, even for wild couple perkutut. Yayah guess perkutut is predestined to be man's friend, indeed.