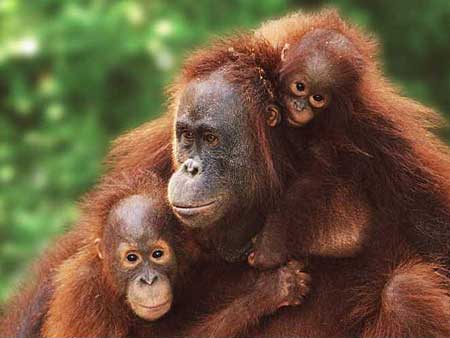 Pongo pygmaeus is species that dwell in Borneo island, and Pongo abelii is species that dwell in Sumatra. They are the only surviving species in the genus Pongo. We simply call them orangutan. It was taken from the words "orang" (man) and "hutan" (forest). Physically, they really resemble human (of the forest). They are the most intelligent primates in the world, beside their African cousin chimpanzee.

Unlike gorillas and chimpanzees, orangutans are not the knuckle-walkers. They walk by shuffling on their palms with their fingers curved inwards. Their fingers and toes are curved, allowing them to better grip onto branches. In addition, the arms of an orangutan are twice longer than their legs.

It makes orangutan the most arboreal of the great apes. They're spending nearly all of their live in the trees. Every night they fashion nests, in which they sleep, from branches and foliage. Orangutans are more solitary than the other apes, with males and females generally coming together only to mate. The females can grow to around 1.27 meters and weigh around 45 kg, while males can reach 1.75 meters in height and weigh over 118 kg.

With those long brown hairs, I must say orangutans are the ugliest ape I've ever seen. However, their population has recently been decreasing. That's sad.

Orangutans as the ancestor of great apes in Asia have been living since two or three million years ago, along the Himalaya mountain range. That means, they've been existed far away from human existence. But then the climate change and the sea surface's heighten made them separate to many forests.

They spread from South to Southeast Asia, especially when the islands of Sumatra, Java and Borneo had unified to one big land. Mostly, those orangutans concentrated all along the main rivers and foot of mountains. They had been living in pleasant with plenty foods resource inside. Fruit makes up 65% of the orangutan diet. Those with sugary or fatty pulp are favored. The other food items include young leaves, shoots, seeds, also insects and bird eggs.

Like the other great apes, orangutans are remarkably intelligent. But orangutans are different. They have shown laughter-like vocalizations in response to physical contact, e.g. wrestling, play chasing, or tickling. And they practice some culture.

At least, that was uttered by Meredith L Bastian. This young researcher from Anthropology Biology and Anatomy of Duke University has been researching the wild Pongo pygmaeus wurmbii in Central Borneo province.

Meredith found that orangutans in Tuanan river speak each other in the sound and tones like a kiss voice. In the meantime, Lading river's orangutan sounds like "tac-tic-toc" at the same effort.

"I never deepen this fact, but I saw orangutans are capable of mind reading their fellows. At the moment, two orangutans just looked at each other, and then one of them gave something that seemed to be needed by another," said Meredith, as I excerpt from Yayasan Penyelamatan Orangutan Borneo.

Orangutan also kiss and hug each other to express the high level of love and affection. And, "When it rained or the sun was too intense, orangutans would seek out a wide leaves to shelter their head."

This finding fits out the previous study done by Carel van Schaik, a Dutch primatologist from the same university. He found orangutans are capable of tasks well beyond chimpanzees' abilities, such as using leaves to make rain hats and leakproof roofs over their sleeping nests.

Carel also found that in some food-rich areas, orangutans had developed a complex culture in which the adults would teach their juniors how to make tools and find food. I know it myself, Sumatran orangutans are acquainted with tools for cracking the solid-peeled fruits.

According to Meredith, if we maintain orangutan's habitats well and keep away the individuals from any (human) threat, it's not impossible for orangutans to perfect their "culture". Unfortunately, here, we always have the problem with hunting and illegal pet trade. About 100 Bornean orangutans took away to Thailand in early 2004, for instance.

Meanwhile, orangutan habitats have been in destruction because of logging, mining and forest conflagrations. But the major problem for now has been the conversion of huge areas of tropical forest to oil palm plantations in response to international demand.

"From total 61.234 individuals in Indonesia, about 70% of them dwell in non-conservation forests or non-protected forests," stated Jamartin Sihite in Environmental Journalism for Orangutan Conservation and Its Habitat seminar which held on July, 11-13 2008 at University of Indonesia. As consequence, the population of orangutans hasn't been well protected, added this Deputy Director of OCSP (Orangutan Conservation Services Program).

If there is not any significant solution yet, OCSP estimates 10 years from now the population will has been decreasing up to 50%. Then for the next 50 years, orangutans will have completely extinct. Won't we miss these ugly apes?