ITS Forest, the Paradise of Wild Birds (Still?) 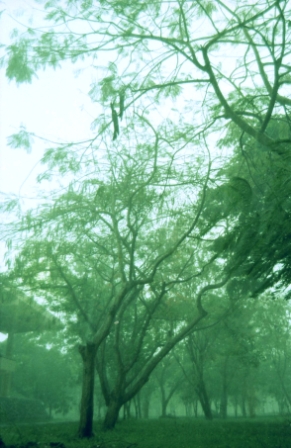 As a man who had ever been lectured in ITS (Sepuluh Nopember Institute of Technology), Yayah admire the park conception of this state institution. ITS forest is not crowded by low trees like any other parks, but the tall trees.

It's a mini forest in campus. We had proclaimed this area as the widest city-forest in Surabaya. Enter it, you'll feel chilled after hit by the heat of Surabaya metropolitan. But what people may don't know much is, this is the area where the wild protected birds proliferate.

If one day you visit ITS, maybe you'll find a bird looking for the nectar around branches. It can be Nectarina jugularis (local name: Madu Sriganti). Or might be when circling around the wet soil near the lecturer's housing, you'll see the big white bird that's stirring up the wet soil. It can be the Kuntul Kerbau bird (Bubulcus ibis). The two birds are scarce species and protected by Governmental Regulation No. 7/1999.

Some other scarce and protected birds inside ITS's forest are Bido Snake Eagle (Spilornis cheela), River Cekakak (Todirhampus chloris), Cow Hawk (Falco mollucensis), et cetera. They are living with 52 other species in ITS forest. "Among those species, the 36 bird species are the scarce species in global scale," told Agus Satriyono, the Board of Pecuk, a wild birds' lover club.

Why did the exotic birds love to be there? Agus guessed, it because ITS area is one of the north coast areas which possess the jungle. "Its wetland habitat and the leafy have been invited the birds to come, even stay."

The birds we're talking about mostly are Ardeidae and Alcedinidae families whose life very depends on the existence of wet soil. When the transitional season came, there would be more birds stopped by on ITS trees. So far, they were around the ITS Stadium and Polytechnic campus.

So Pecuk has often stayed tune for bird watching there. Unfortunately, from 2004 to nowadays the birds' quantity has been decreasing. "Perhaps they moved out for a new place, since ITS forest's has been shrinking either," Agus said. Beside, the smoke from trashes incineration (thank to the janitors) and the bird hunting (thank to the irresponsible persons) are also distracting them.

Frequently we saw, several men carried a rifle in arrogant way, looked up to the poor beautiful birds. The "Shooting Forbidden inside ITS Area" sign was useless. Of course the arrogant people don't care whether those gorgeous creatures are scarce or not.

"For the securities of ITS, please do prohibit strictly the outsiders, and also insiders, who're trying to catch, trap or shoot the birds, stole the nests, in ITS. Me myself observed such activities at about 6 clock in the morning in around the Postgraduate Building," Alam, an ITS student, reported.

4 komentar untuk "ITS Forest, the Paradise of Wild Birds (Still?)"