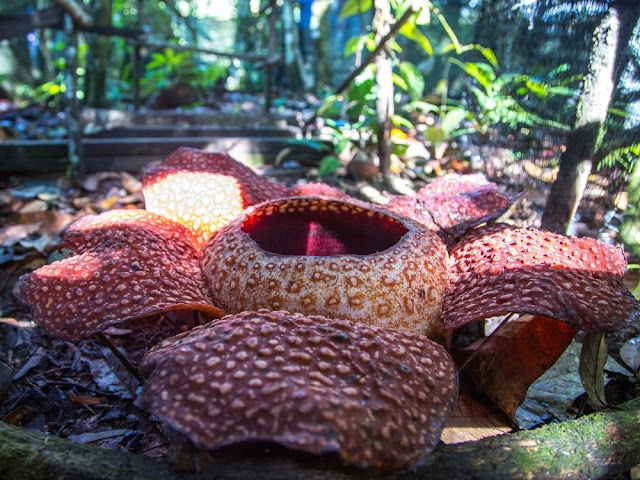 The rafflesia flower was often confused by titan arum flower. Even few of media in Indonesia made the common mistake. Rafflesia and Titan arum both are giant flowers. They give off the rotten smell, like a cadaver, so both can be nicknamed as "corpse flower". The odor's function is for attracting beetles and flies to do pollinate.

The both also grow in Sumatran rainforest. In Bengkulu, rafflesia has been a motif of Besurek batik (kind of batik specialty Bengkulu) since a long time ago. In other hand, titan arum is official flower of Bengkulu Province. So this is a little bit confusing, in no doubt. But you'll see the clear different within this table:

Odoardo Beccari, an Italian botanist, first discovered titan arum in Sumatra 1878. Though found in many botanic gardens around the world, titan arum is still indigenous only to the Sumatra's tropical forests.

Rafflesia is rare. It's difficult to locate the strange plants in forests as the buds take many months to develop and the flower lasts for just a few days. How many of these flowers still survive is unknown. It might be almost extinction. As the remaining primary (undisturbed) forests of Borneo and Sumatra disappear, it can only be assumed that their numbers are declining.

If you'd like to see the both flowers in indigenous habitat, visit Indonesia. We'll tell you when hear that they are about to bloom.