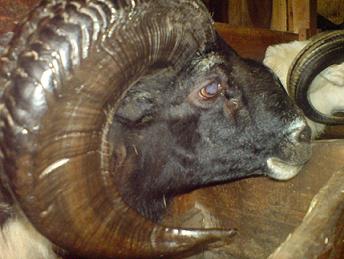 When you’re hard to sleep, try to count sheep that jump on the cattle’s fence. Why it has to be sheep? No one knows, for sheep is just an animal. Including garut sheep. It only gives us meal and fur to the sweaters. So we thought this animal is not special.

But, when Bunda followed the discussion at PSS (Sundanese Study Center) a few months ago, she finally realized that a sheep is not only about meat or clothe.

Believe it or not, sheep means prestige too. Especially garut sheep. The species is a mix product of Merino sheep from Australia, Capstaad sheep from South Africa, and local sheep in Garut. This kind of breeding was pioneered by K. F. Holle at the beginning of 19th century. Then, the sheep was raised by the governor of Limbangan, Surayakanta Legawa.

Garut sheep’s body is big and round. The horn has a good shape like Merino sheep. The tail reminds us to the rat: the top is round and the bottom is sharp. Then the ears are small. The face is wide.

Good looking, strong, and powerful, garut sheep has an instinct to fight. Maybe you’ve heard the Indonesian term "adu domba" or provoke someones to fight each other.

But "adu domba" we’re talking about now is “domba tangkas” which means a sheep contest. In this contest, the jury judge the garut sheep from its body, power, health, and appearance (e.g. from how it is dressed).

The rule of the game has changed. Before, the game is over when there’s one sheep that died. Now, it considered finish when one sheep has 25 strikes to the rival (for a sheep whose weight is more than 80 kg).

I’ve heard the information that the price of garut sheep could reach 30 million rupiahs! Wow! So, if you have this kind of sheep in West Java, your prestige will increase. No wonder, some people use garut sheep as investment.

With all its qualities, garut sheep becomes one of our national culture resources, especially for West Java. It’s amazing how a sheep has so many functions. They can do many things in life, whereas they just eat grass. So, what can we do as human who eats various of foods?

It had been two months, Bunda lived in Surabaya. As we know…

The rafflesia flower was often confused by titan arum flo…