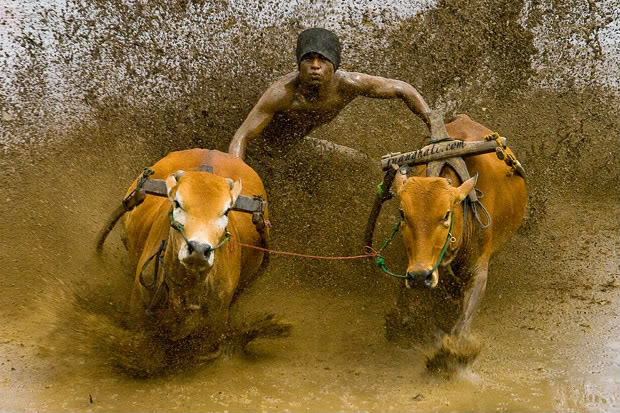 We love cow. We eat its meat, drink its milk, and sometimes use its muscle for traditional plowing. But did you know, in Madura, East Java, people get more creative. They use cows to walk a tradition called karapan sapi (bull race).

A couple of bulls pull a wood cart where the jockey stands and controls. They compete with other participants for 10-60 seconds all along 100 meters. They hold karapan sapi race every year in August and September at Pamekasan Region to win the Trophy of President, or at other regions in Madura to win the Trophy of Regent.

Why a bull race? Aren’t Madureses interested with any car or motorcycle race? Are Madura people too poor to race in automotive? No, not like that. Of course, karapan sapi has its own history.

A long time ago, Madura land wasn’t good enough to be used as farmland. That’s why Madura people worked as fishermen and bull breeders. Then, a muslim leader (ulama) Syeh Ahmad Baidawi or Katandur Prince, came and introduced a way to farm by a pair of bamboo called nanggala or salaga. This nanggala is pulled by two bulls.

To get strong bulls for plowing the rice field, people held karapan sapi. This idea then became a hereditary tradition. People holds such event every year, started by taking the bulls around the race arena accompanied by saronen, a kind of Madurese music. Only Madurese bulls that can be used for this race, they usually are wilder and stronger.

How Does Karapan Sapi Run 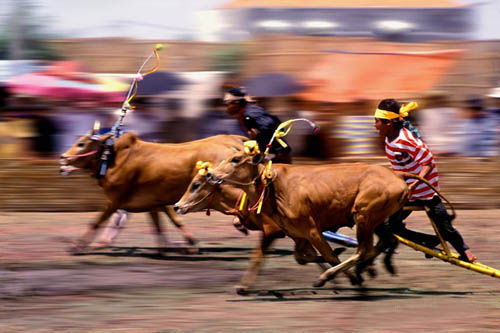 First, all the bulls compete in couple. Second, the winners will compete each other, as well as the losers. They search for the grand winner from the winner group and the loser group.

Previously, karapan sapi was held in normal, sportive way. People use sagersa (lash from dry leaves of banana or coconut). But nowadays, people has started to use rekeng or a whip that full of nails to lash the bulls’ asses.

Poor bull. You wouldn’t see anything from spectator’s bench. But if you take a closer look, you’ll see the cuts and blood on the bull’s back. The bulls’ owner even lubricates hot balm to their eyes and anus before the race. All just for one purpose: to make the bull run even faster.

Why would civilized people do that? Maybe because it’s the main attraction in Madura. Moreover, it’s very prestigious to win this race. Besides the official cup from Regent or President, you can walk off 75 millions rupiah after you win this competition. Not to mention what you’ll get from the bet market.

So, not only to torture the bulls, to spend millions rupiah a day, karapan sapi team won’t mind! FYI, each racing bull needs litters of tonic, 80 eggs, and a massage, every day.

No More Animal Tortures, Can We?

We love the race. But the violence is really bothering us. What’s the difference between karapan sapi and dolphins’ slaughter in Taiji (Japan), then? Or whales’ butchery in Faroe (Denmark)? Or matador and Toro de la Vega event in Tordesillas (Spain)?

They are developed countries, but for the sake of tradition, they are willing to torture animals. It doesn’t make sense!

Fortunately, in Madura, we see the enlightenment finally. The ulamas and some Islamic organization recently say no to the violence in karapan sapi race. They thought, we can still hold the bull race in usual way, without violence against animal.

And we Homerie, of course, agree with them.