Kebaya: a Culture, a Couture 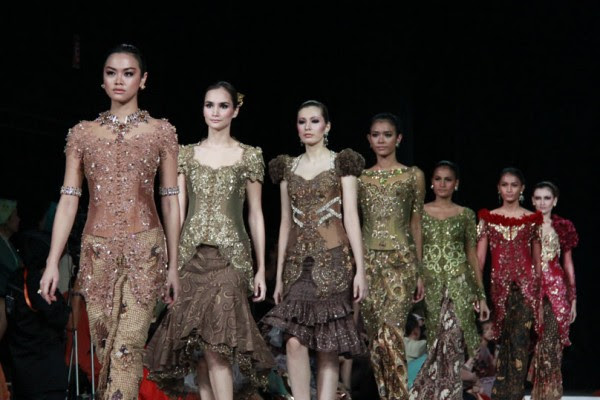 When we were child, most of us didn't like this traditional cloth. We just couldn’t see the elegance of kebaya. Or maybe it's just because we rarely saw a beautiful, sexy and modern woman wore it. You know, kebaya is made of sheer material such as silk, thin cotton or nylon, with semi-transparent appearance. So, if a fatty lady wears kebaya, people can easily see her fats pop up everywhere, though its brocade or floral pattern embroidery will cover some part of them.
Then we started to appreciate kebaya. At the moment, some fashion designers begun to experiment with kebaya in different way. Not just in the look, they improved the function as well. The designers used 'uncommon' things like clasps, zippers and buttons. So kebaya de nos jours is not as troublesome as the old-fashioned ones. At least, it's far easier to remove without a helper around you.

Did you know, in the near past, maybe only the jamu (traditional herbal medicine) vendors in Java and Bali Island who wear kebaya. Now, it's wore by a wide range of women in each social circle: the travel guides, gas station staffs, middle-up employees, directrices, stewardesses (specially of Garuda Indonesia airlines), singers, until the President (i.e. Megawati Soekarnoputri).

But, wait a minute. Do you know what is kebaya, don’t you? Or at least, what does it look like?

Ok, let’s step back for a while. For you who don't know what kebaya is, kebaya is a female traditional blouse-dress combination that originates from Indonesia. Well, actually the women in Malaysia, Brunei, Burma, Singapore, southern Thailand and the southern Philippines also wear it. Though not as many as in Indonesia. Because here, kebaya is considered as a national costume, even though most of its user are the Javaneses, Sundaneses and Balineses.

The kebaya blouse is normally semi-transparent and worn over the kemben (torso wrap). Usually, kebaya is worn with a sarong, batik, or other traditional woven garment such as iket or songket.

Somehow, kebaya symbolizes the woman's emancipation in Indonesia through the big shadow of a proto-feminist figure, Raden Ajeng Kartini. That's why every April 21st, which is Kartini’s birthday, the female students and workers together celebrate it by wearing the best kebaya they have.

Not only a subject of feminism, kebaya has historically correlation with the nationalism too. Thus by the 1920s, the European ladies stopped to wear kebaya as it was identified with typical Indonesian outfit. For the European colonizers, kebaya had become associated with Indonesian patriotism. Same case during the Japanese occupation. In 1942-1945, some educated Indonesian women who were the war prisoners chose to wear kebaya rather than western prison dress.

See, kebaya is not merely a traditional outfit of Indonesia. It's also a symbol of Indonesia's struggle within centuries. The design alone is being modernized day by day. Talking about kebaya today is not just talking about the culture, but also about la haute couture. A fine quality of fashion.