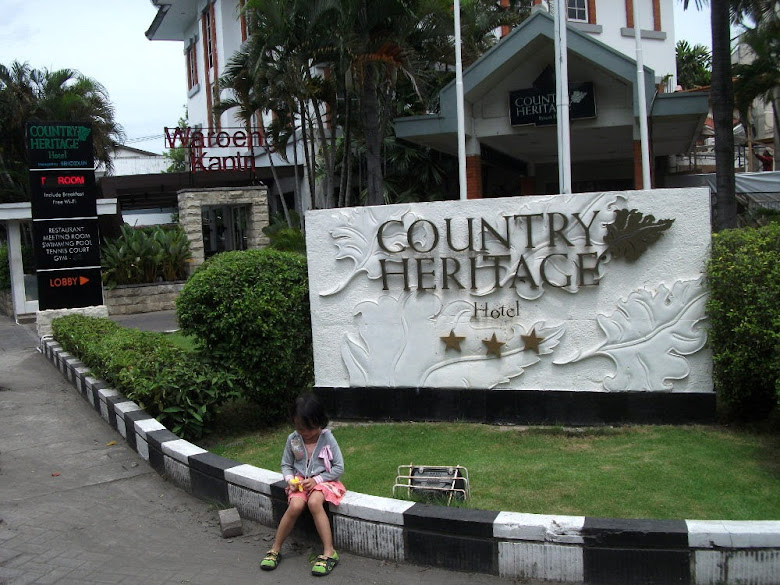 We never traveled anywhere during public holidays. Because the cost would be expensive, and the crowd would run over. However, we broke that golden rule few days ago. We were forced to take a vacation. What happened?

There was a caterpillar plague at home. We found hundreds, if not thousands, of hairy caterpillar on our starfruit tree, out of the blue. Their random flying hairs stung and were super itchy. For four days, we've been trying to terminate the colony (by fire, insecticide, blades, and sandals) to no avail.

Didn't want to scratch forever, we finally decided to fell the tree and evacuated the area to avoid their remaining hairs. That's why we booked a hotel, Country Heritage Resort Hotel. 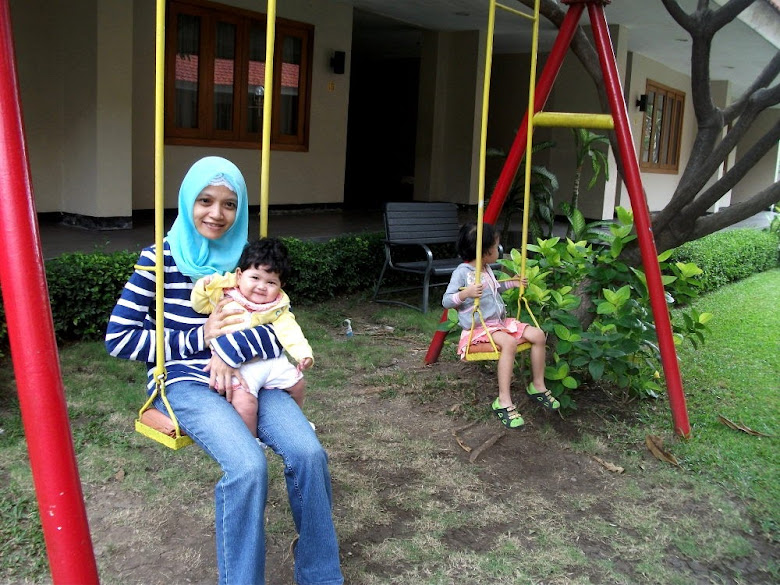 Here we were. Took an asylum in the Country Heritage Resort Hotel. However, it surprised me that the hotel has a green garden and our room was surrounded by trees. Yayah and Bunda stared each other like, "Gosh, what if one of those trees is dwelled by a colony of hairy caterpillars too?" 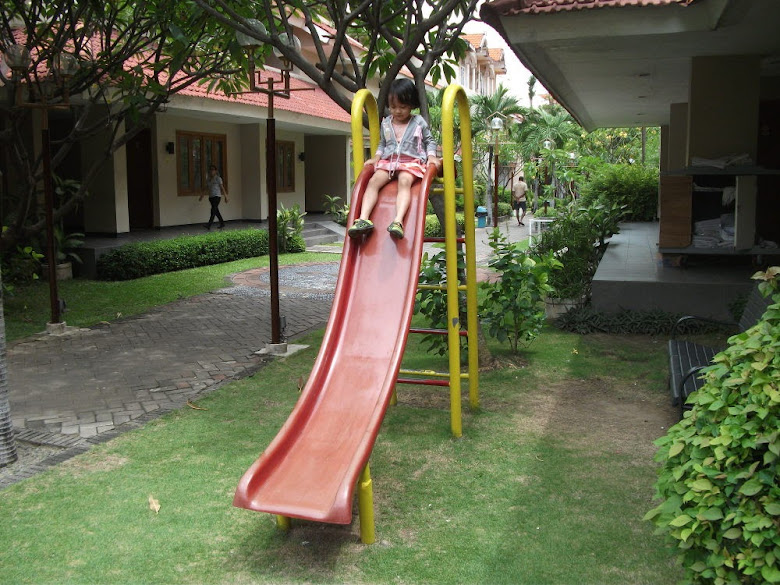 Fortunately, the trees were clear. On the contrary, my itchiness was decreasing during our stay, even we were going outdoor sometimes. Ara and Kira loved to play in swimming pool. Yayah accompanied them topless. If the air contained caterpillar's hair, he would be itchy again, wouldn't he? 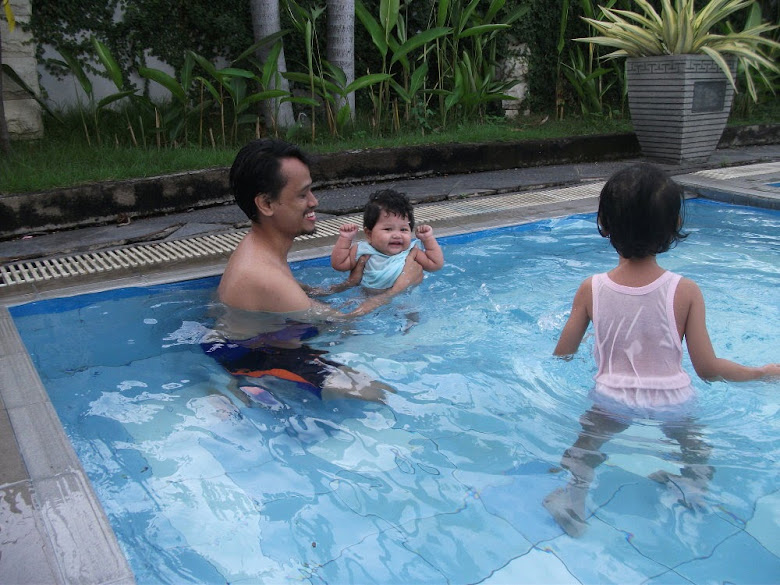 We also played quite long at the playground, near the trees. But, we were fine! 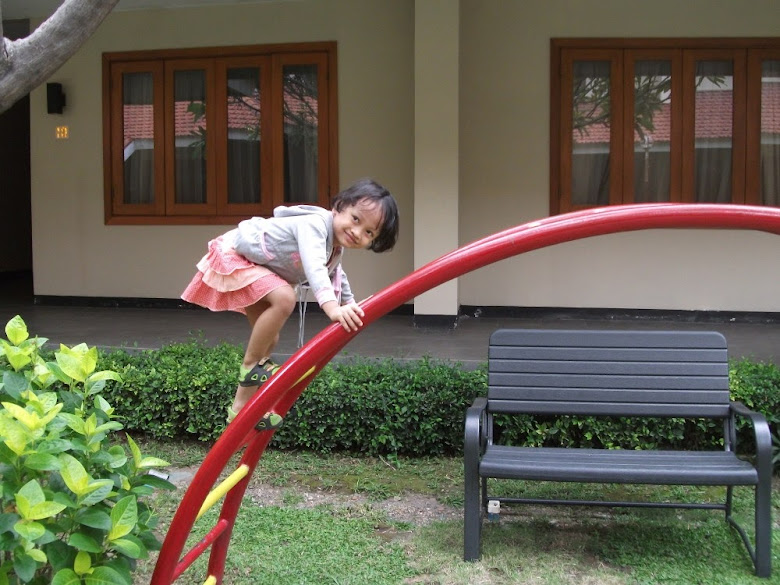 Oldie. Maybe that's exactly the word "heritage" means, but we don't like its old style. Unlike modern hotels, Country Heritage is not a vertical building. It's more horizontal such as houses. Also, don't expect minimalist or simple chic here. Well, every guest might has different opinion and taste. But I guess not for the clean issue. 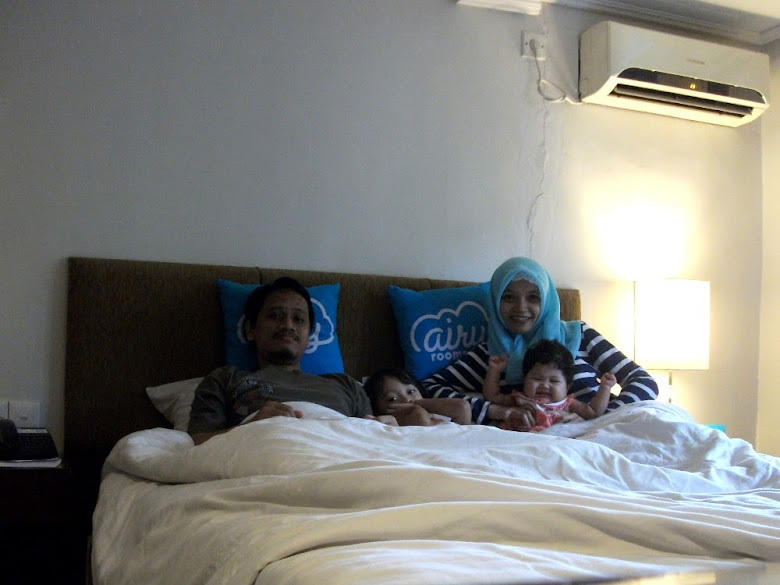 Clean issue. Country Heritage Hotel has 72 rooms so far. Maybe not every room is like our room, but we smelled dust in our Room 2001, which didn't disappear until the day two. Not to mention a red spot on the blanket and peeled off wall.

Luckily, there are more positive things we found in this hotel. The Internet signal, for instance. It was strong and stable. Not just inside the hotel, but also when I walked away up to 50 meters. This is most feature we expected. Without water, one could live for two days. But without air, one could die in two minutes. It would be faster if the air didn't contain wi-fi. Ha! 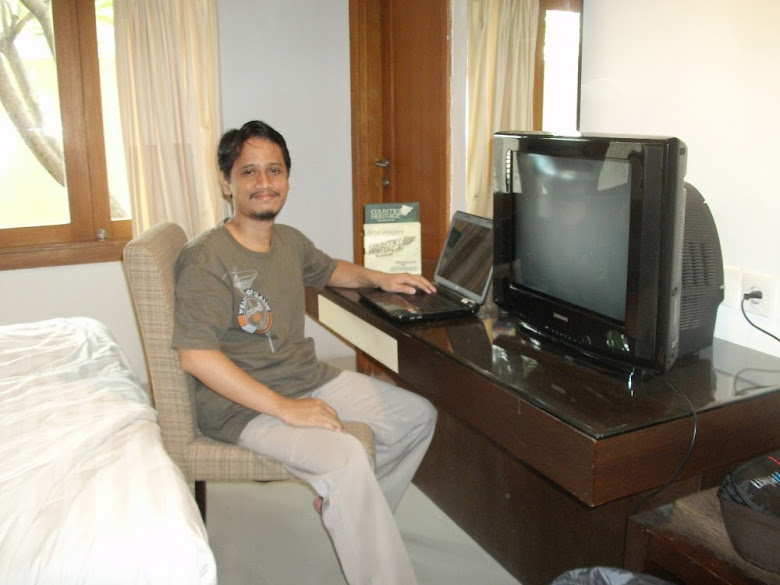 Wide rooms. Our Deluxe Double Room is 25 square meters. It's pretty wide for kids to run helter-skelter inside. 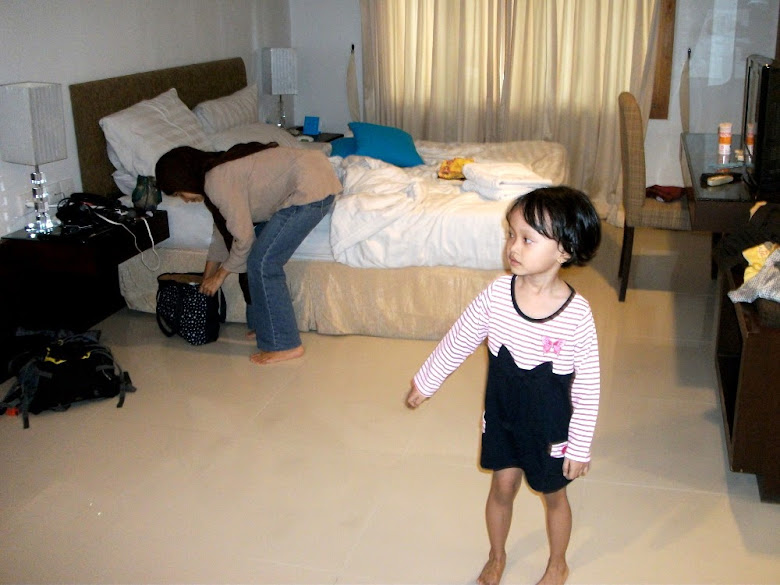 The staffs were politely helpful. Check-in and check-out were fast. They took initiative to carry our bags, from the car to the room when we checked in, and from the lobby to the car when we checked out. They definitely know hospitality. The receptionist never answered phone calls from our room, though. 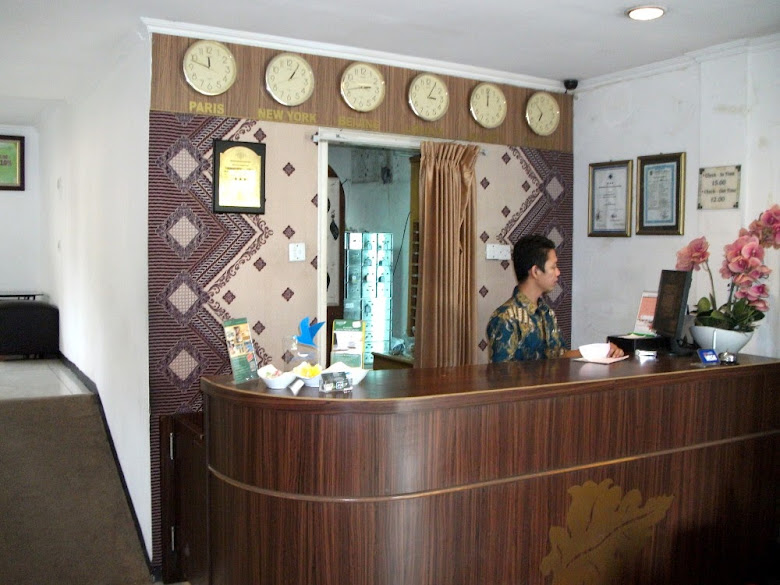 We love the pool and the playground. There are two swimming pools in Surabaya Country Heritage: normal pool (around 150 cm deep) and children pool (around 70 cm deep). So, even our 6 month old daughter, Kira, could have fun with us in the water. The playground was pretty fun too. 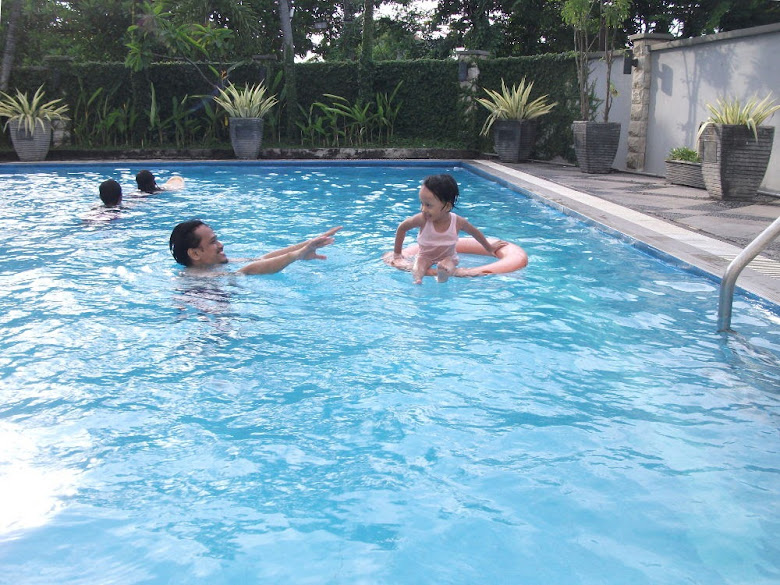 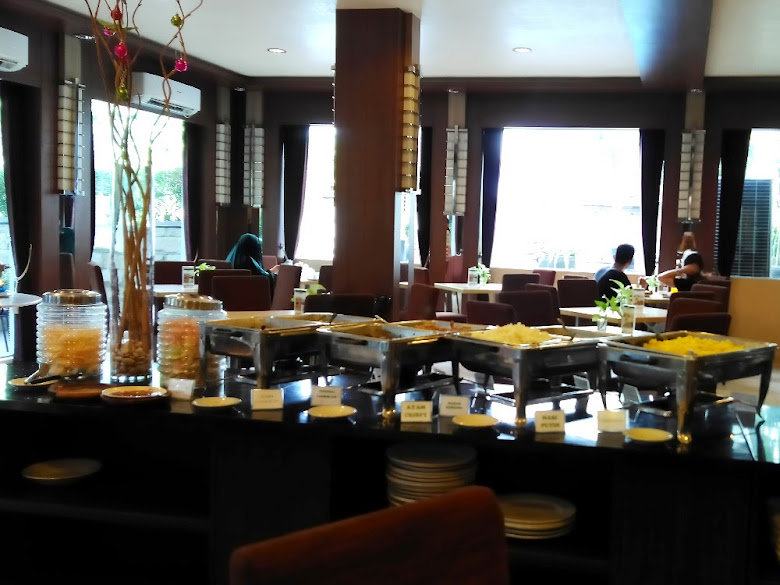 The food is great. The hotel has Waroeng Kantri and Cafe Palma. We took a breakfast at the cafe. The main menu were yellow rice, white rice, breads, noodle, cereals, crispy chicken, fishes, corn soup, vegetables, eggs, crackers, pudding, fruits, and so on. 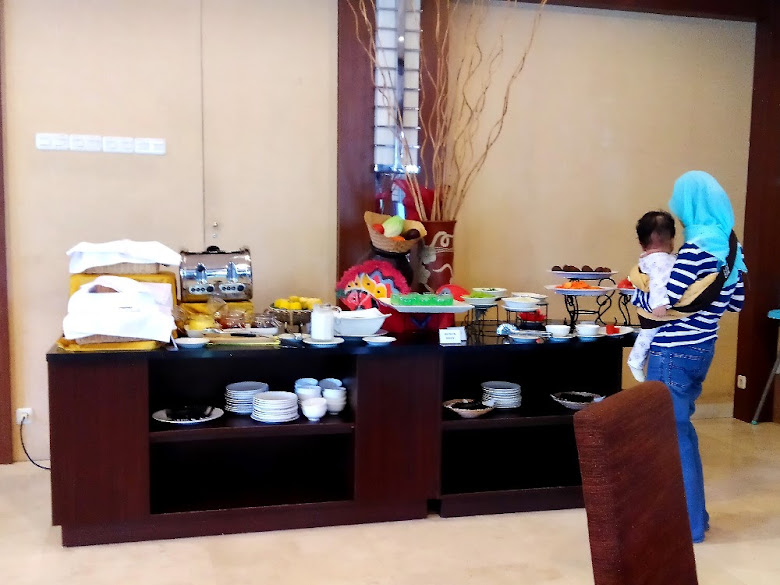 For beverage? There were coffee, tea, milk, apple and orange juice. Serve yourself. 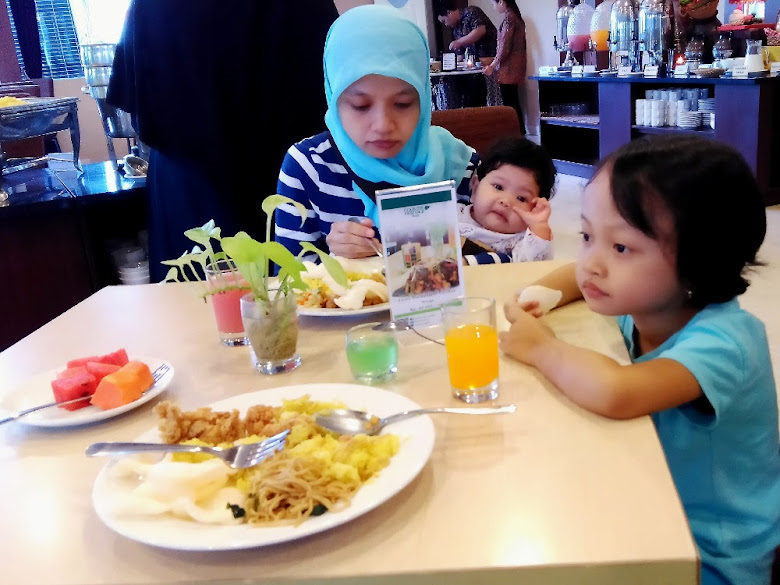 The room is well-equipped. There were shower, bath kit, towels, AC, reading lamps, tables, big shelves, and a kitchen set. Every shower and tap had hot water option. So, don't worry to bring a toddler like we did. 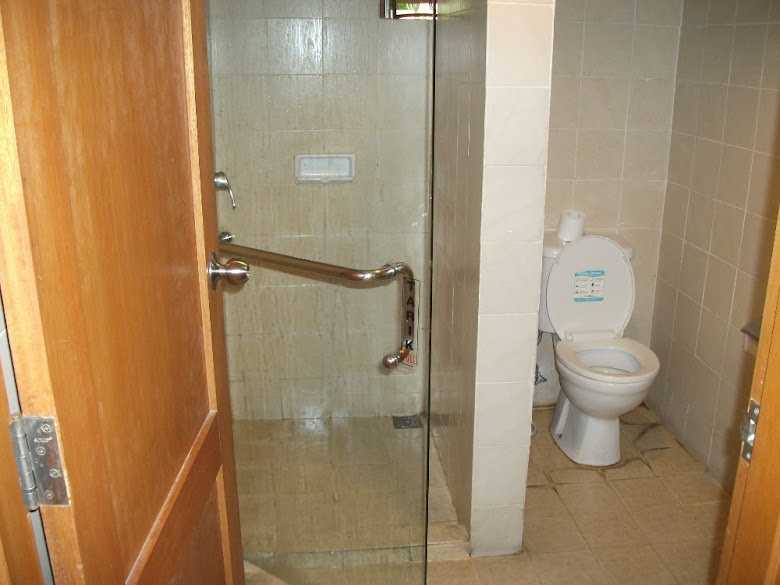 Yes, we think Country Heritage Resort Hotel suits family travelers. Besides the children playground and swimming pools, there are kids corner (though we didn't see it yet), reading corner, and hourly bicycle rental as well. 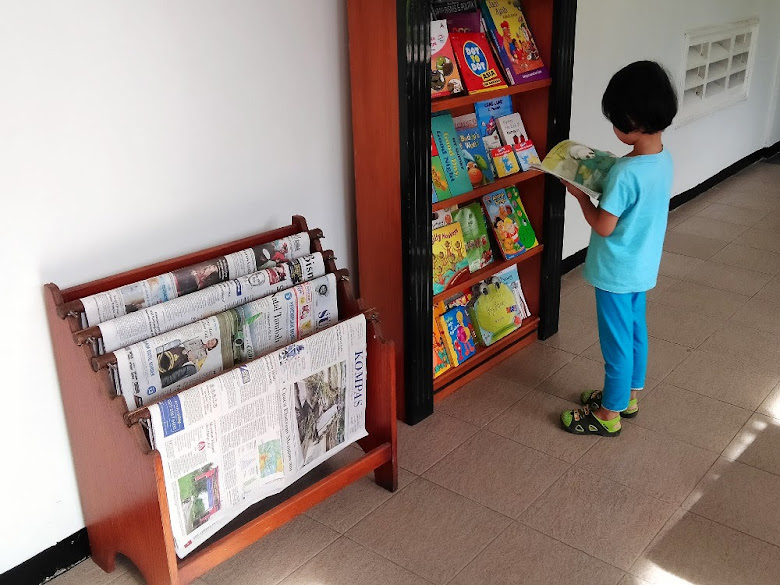 Our plan was only to seek a temporary asylum from the caterpillar assault. But we ended up with a nice, warm family recreation. Two thumbs up from the Homeries. 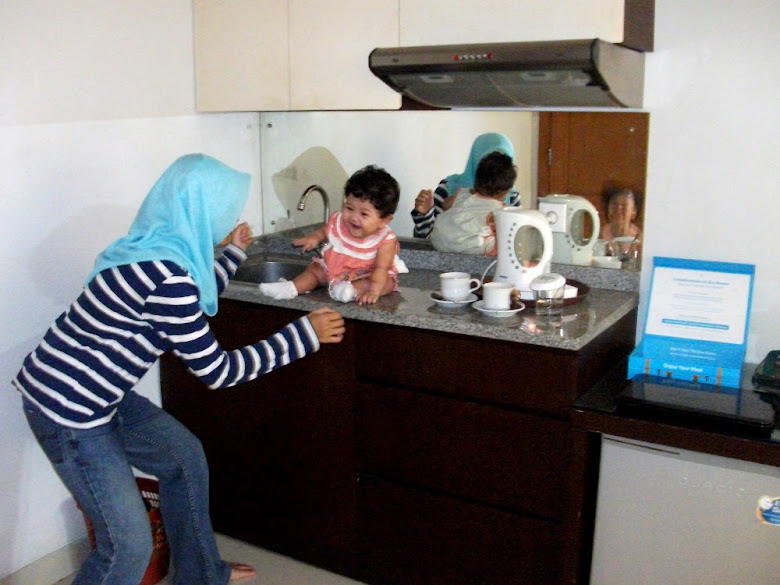 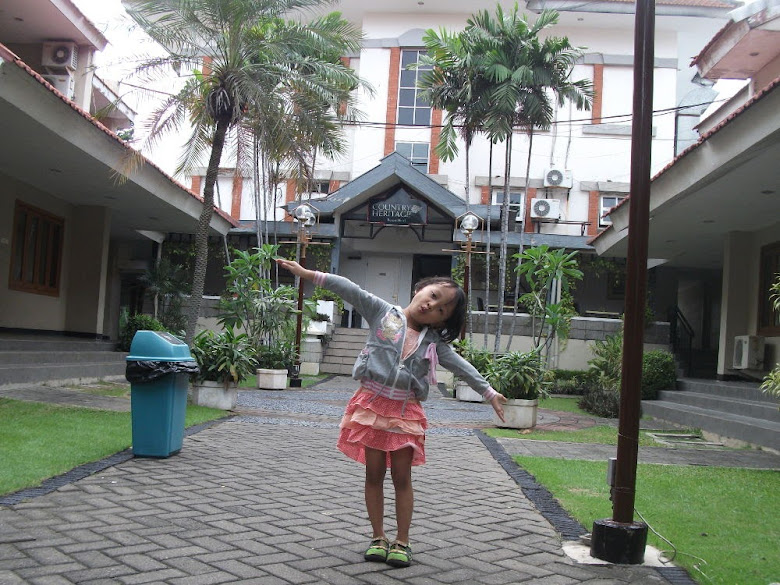 - Photos by Brahmanto and Rie