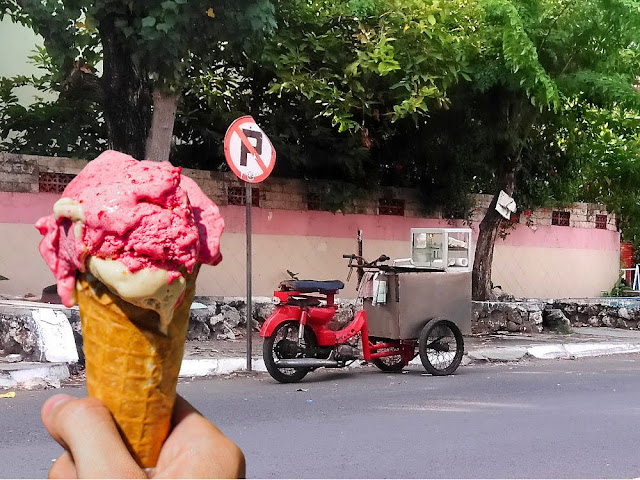 Ice dung-dung a.k.a. ice puter is one of the legendary ice creams in Indonesia. We used to eat it as a dessert or a snack here. Unlike most ice creams, ice puter has rough texture. However, it's tasty and fresh, since the ingredients are coconut milk (santan), salt, sugar, and ice cubes.
Not only the ice itself, the toppings are mouthwatering as well. It can be some sticky rice, sago pearl, breadcrumbs, nuts, jackfruit, avocado slices, or better yet: take them all!
Ice puter is usually served on a plastic glass or an eatable cone. Sometimes, it's served between two slices of bread.

Why is this dish is called ice puter, by the way?

It's because while making it, we must continuously spin (puter in Indonesian) the ice-maker until it crystallizes. Meanwhile, the name dung dung is an onomatopoeia of the gong that are usually pounded by the seller while peddling it.

We heard a story that in the past, long time a go, local people in Java wanted to taste some ice cream so bad, but could not afford it. Milks were very expensive in Indonesia, back then.

So, they started to create the cheaper version. They replaced milk with santan. And coincidently, this replacement makes the "ice cream" tastier than any regular ice cream. Long story shorts, by combining that coconut milk with local fruits such as young coconut, jackfruit, or durian, they had this Indonesian traditional ice cream.

Slowly but surely, ice puter has gained its popularity. Its deliciousness spreaded word-of-mouthly. Later, the number of its traders increased in various regions in Java Island.

Unfortunately, along with the growth of the Indonesian economy, ice puter's fame is declining. Now, you'd got harder and harder to see the ice tung-tung's sellers with their carts.

Nevertheless, at some folk parties, such as weddings or social gatherings, ice puter is still a mandatory menu.

How to Make Ice Puter

Curious yet? Would you like to taste this legendary ice cream?

If so, you can go searching the seller in some Indonesian rural area, or some wedding party you might attend. But, we think you wouldn't that lucky, considering even among local citizens, ice puter sellers are already rare.

There is an easier way, actually. You can make it by yourself. Don't worry, the recipe is simple and cheap. For four glasses of ice puter, you only need:And this is how you make ice puter:Easy, right? It's even easier if you have an ice-cream maker. You wouldn't have to do step #4 until #7. After the third step, you can just put the dough onto that tool and get the process done.