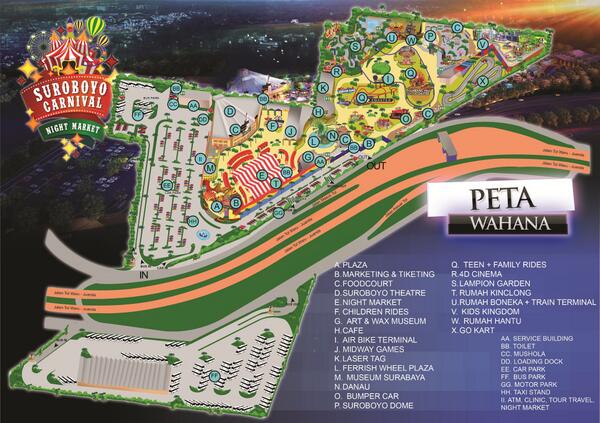 Since 2014, Surabaya has one more attraction to visit. It’s an amusement park like Dufan in Jakarta, Trans Studio in Bandung or Makassar, or WBL in Lamongan. Suroboyo Carnival Park is a night market (pasar malam) and a carnival. Developed by PT Sinar Mutiara Sinergi, Suroboyo Carnival Park serves indoor and outdoor rides. When you have no idea where to get some fun in Surabaya at afternoon, just go there with your friends or family.

Like we did that night. The night was still young when we arrived at Suroboyo Carnival Park, and was almost over when we went home. Fortunately, our toddler didn’t feel sleepy that late. She was too preoccupied exploring every corner of the site. 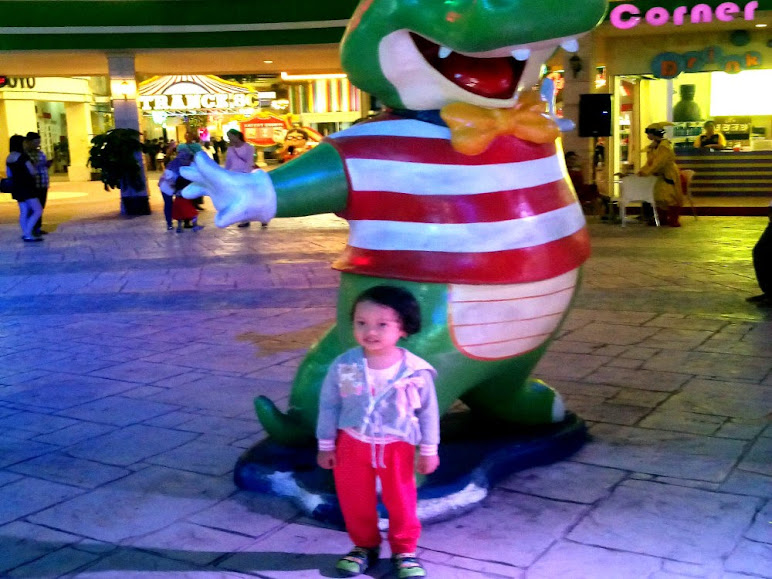 Suroboyo Carnival Park lays on 8 hectares area. If we are not mistaken, it is divided into four main sections, i.e. Terrace, Night Market, Carnival Area, and Cafés & Food Court. Here what are in there (we bolded my favorites)….

It’s a welcoming ground. Wide enough. There are some stores, loket, management’s office, and Galeri Suroboyo (a museum of popular and historical stuffs in Surabaya). Apparently, you may visit this area for free. 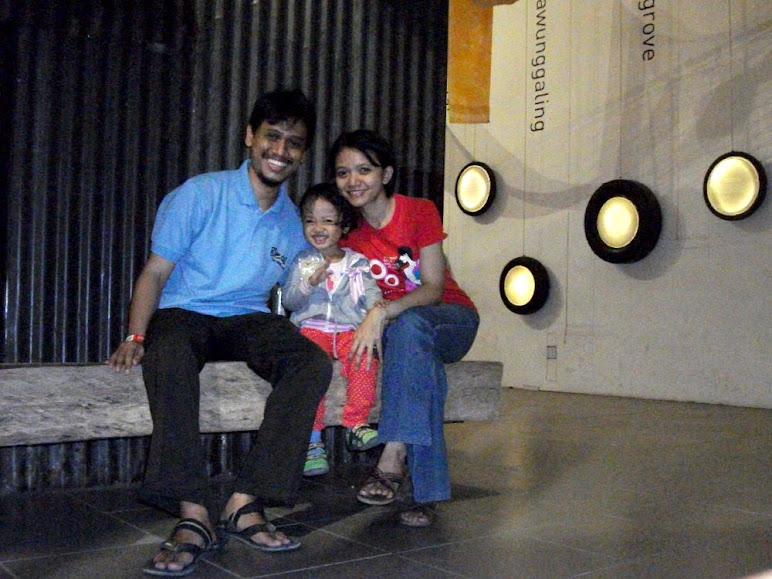 Take some photos with the clowns or take a selfie in front of Suro the shark and Boyo the crocodile statues. FYI, the duel between Suro and Boyo was the genesis of Surabaya City.

Free? Yes. When we entered Galeri Suroboyo building, there wasn’t any officer asking for ticket. 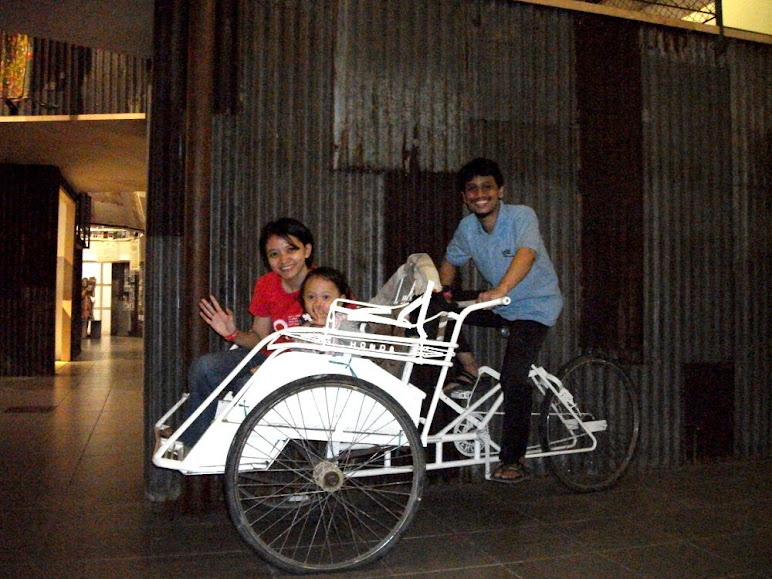 So actually, you can come, see, and take some pictures, then go home without paying anything (except a parking ticket), and are still legit to brag that you have visited Suroboyo Carnival Park. However, you just don’t know what you missed 🙂 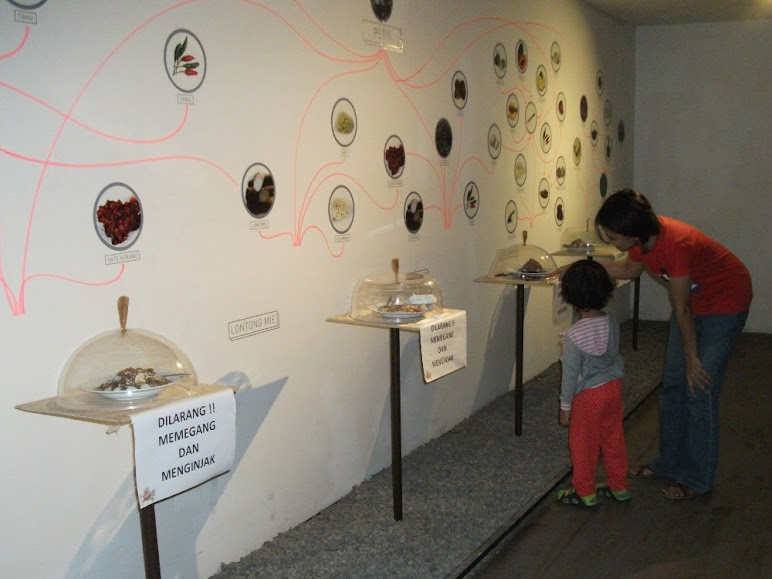 When other normal markets are closed during the night, everything you need to shop is here. The Night Market has more than 200 booths that sell crafts, snacks, staples (rice, sugar, etc), clothes, hats, souvenir, and so on. Unlike ordinary night market, the booths in Suroboyo Carnival Park are neat and thematically designed.

The Mlaku-mlaku nang Tunjungan booths, for example, are in old Dutch theme. While the Kampoeng Arab Ampel booths are more Arabic. And the Pecinan Kembang Jepun booths are such a China Town. Did you know that Surabaya culture was formed by those three cultural roots? Netherlands, Arab, and China. Besides, of course, Javanese. 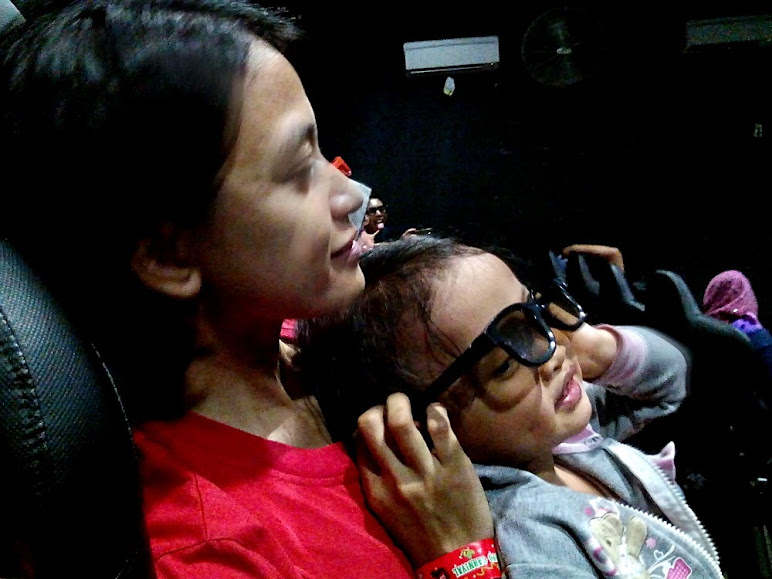 For multimedia spectacles, try to watch 4D Theater. The film was about you on a coal car, which speeds on the rail through mines, caves, forests, and mountains. It was enough to make the spectators scream on the moving chair. Our 3 year old daughter was very excited too. She remembered every detail of that 5 minutes film.

We also enjoyed Beskop 360º. It’s a standing cinema show where the screen is circling the spectators. Before you watch the movie, the operator would take footage on you giving a salute and yelling, “Merdeka!” (freedom!). 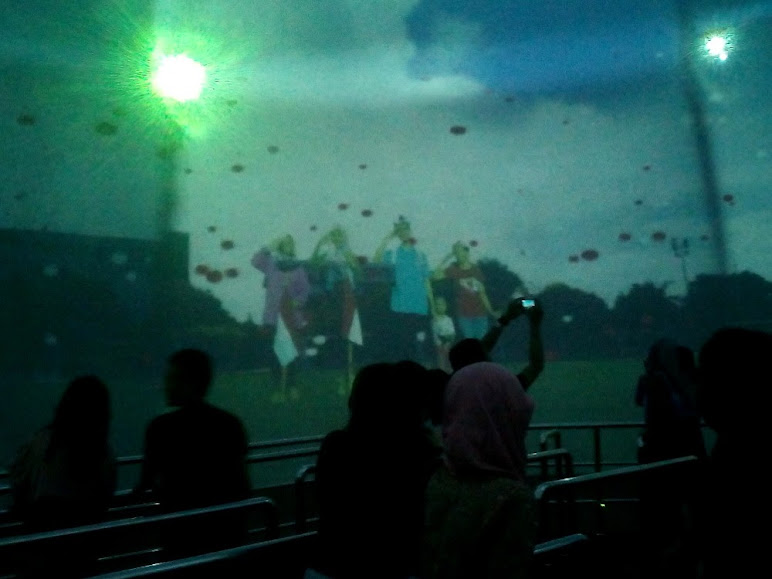 The animation movie is about the battle on November, 10th 1945 in Surabaya. You are in the middle of it. Dutch soldiers are in front of you, while Indonesian troopers and Surabaya militia are behind. Bullets, bombs, and curse are around you. You should be thrilled if you know the story.

Then in the end of the movie, they display your recorded footage, giving more patriotic dose within your nerves. Cool! 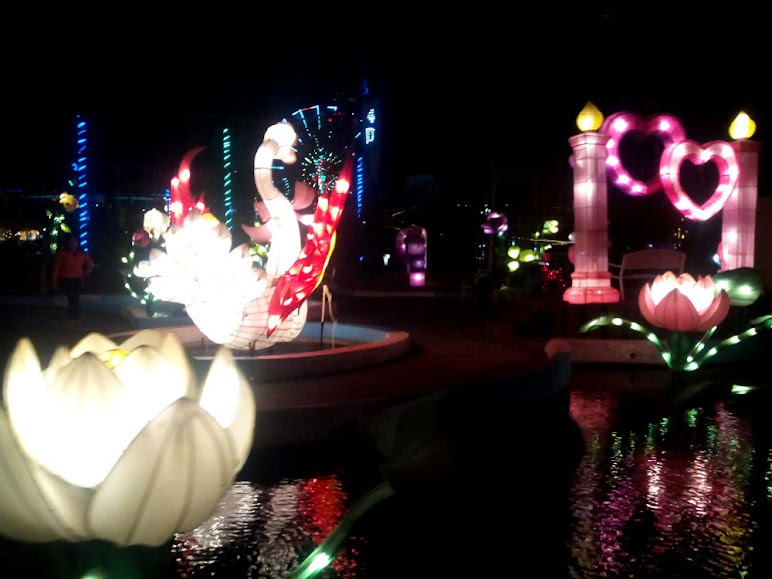 There are still many attractions: Art & Wax House, Rumah Kinclong, Lampion Jungle (a lovely park with many of lanterns formed in animals), Sepoer Sirkus (a hoodless train with route around the “cave” and Lampion Jungle), Pirate Ghost Ship…. 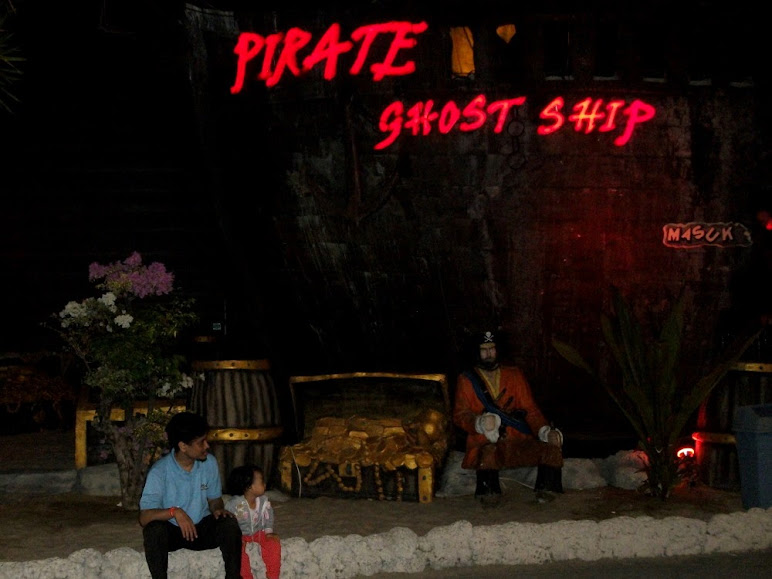 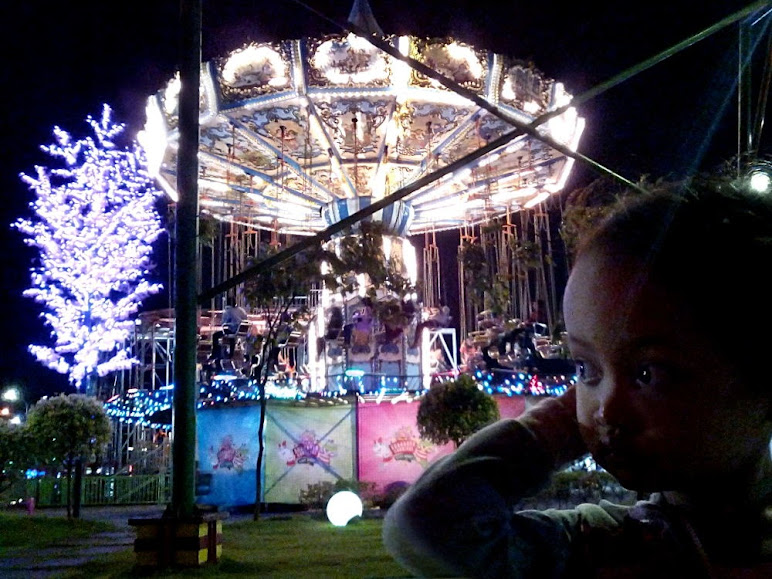 When we got our feet in Kids Kingdom, a playground for children, it was already 21.40. Of course, no child was up to time. Nobody was there except us. So, my daughter could play anything she wanted like she’s the queen of that kingdom. Only, we were in rush, because it was nearly closed. 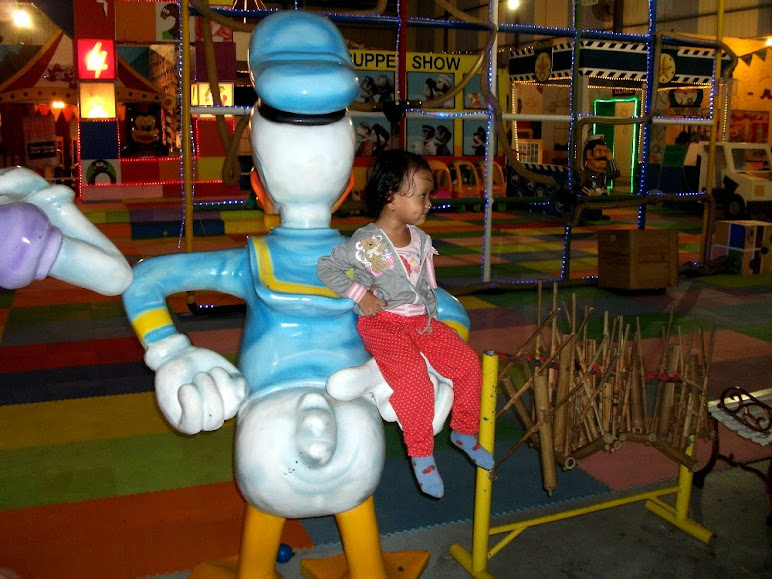 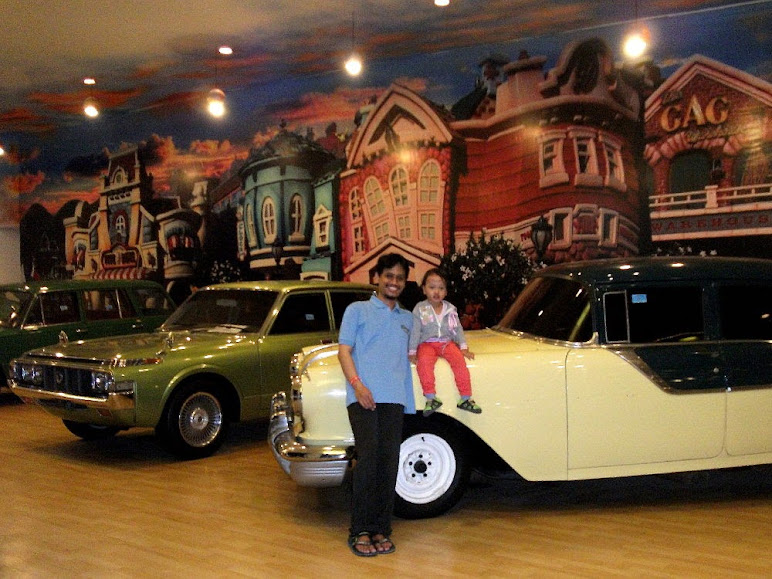 No need to worry when you’re hungry inside Suroboyo Carnival Park. Because there are a lot of culinary option here. Indonesian food? Chinese food? Asian food? Western food? Cafés? Just choose and sit down. There are:

Finally, we reached the end of our adventure in Suroboyo Carnival Park. It was 22.25 and my daughter didn’t want to go home. We went to many places before. But this is the first time she was too astonished to walk to the parking lot. She just sit under the globe monument. Didn’t say anything. But Bunda and Yayah knew, she wanted to go back to the Carnival Area. Oh, my sweetie… 🙂 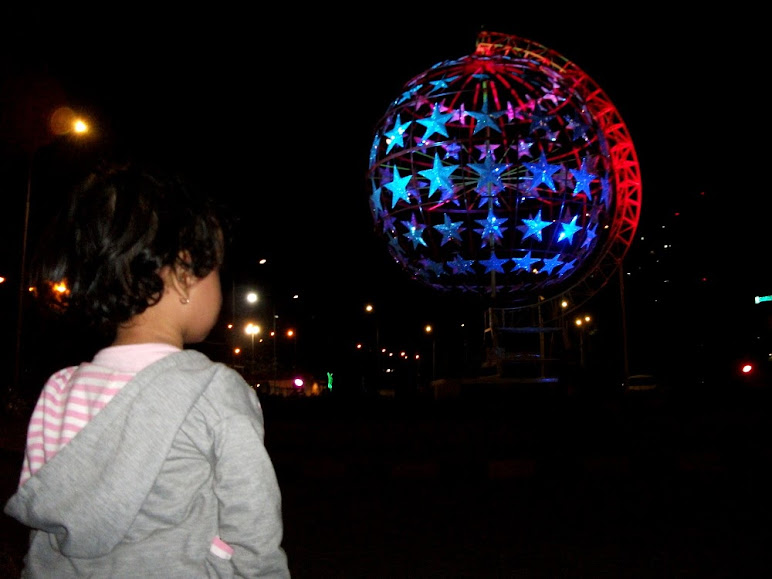 With the ticket, you can enjoy most of the rides in Suroboyo Carnival Park area. But not all of them. For instance, in Art & Wax House, you need to pay 20,000 more.

Art & Wax House is a trick art gallery and a wax museum (like Madame Tussaud). However, from what we saw on Internet, the paintings and the statues are not fine enough. So, we passed it. We appreciate the idea to bring the wax house to Surabaya, though.