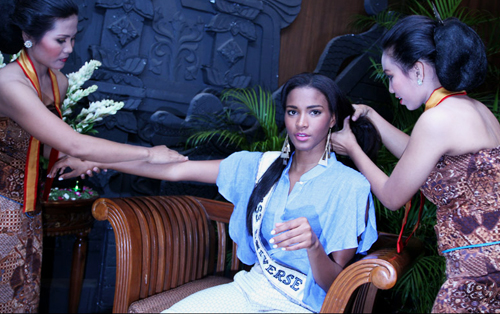 When you ache in your body, what do you do to make it better? The massage, of course! It’ll make your body relax, fresh and healthy faster. But tell me, do you know the massages from Indonesia?

It has existed since centuries here. You can find massage scenes on reliefs of Borobudur Temple, in Magelang, Central Java Province. This traditional healing technique was influenced by Chinese and Ayurvedic (Hindu traditional medicine system from India using herbal scented oils).

Indonesian Massage: Between Pijat and Urut

When King Hayam Wuruk from Majapahit Kingdom, embryo of Republic of Indonesia, married a Chinese woman, local people started to recognize healing arts of acupuncture and reflexology technique. In meantime, the massage techniques were also introduced by Arabian, Chinese, and Indian traders who sailed to Indonesia for spice trade.

Indonesia is a melting pot. So, many cultures are mixed here. Including the massage techniques.

The most modern of healing technique of massage was found in Java and Bali, which were no doubt developed from Majapahit Kingdom tradition. During that era, the massage evolved not only for healing, but also for relaxation and beauty.

Pijit is more common and is used for relaxing and toning the body. It works only on the muscles by kneading and squeezing it with repetitive movement of the flesh between fingers, as well as palm.

While urut is more specialized and used to treat bone fractures and muscular injuries. It can be painful, working not only on the muscles but also on the nerve paths. The purpose is to heal and encourage blood circulation.

However, urut also uses some of the same techniques as pijit, only the pressure is stronger. That’s why it’s painful and urut practitoner (“tukang urut” in Indonesian) must have a great knowledge of anatomy, including bone structure, nerve pathways and pressure points.

In my Bunda's village (and maybe some other villages as well), there is a woman massage practitioner who specializes in women’s problem, such as helping women become pregnant, helping them prevent pregnancy and restoring the womb to its proper position after giving birth, helping a new mother to restore her former shape.

Unique enough, isn’t it? Yet, Indonesian massages are not only that.

Have you heard about coin massage? Indonesian term for it is “kerok” (verb). People do this when they get cold or bad wind, with symptoms such as weak, tired, aching in muscles. The kerok massager will repeatedly drag a coin across your back or neck skin with balsam, until the skin is marked with red lines. After this therapy, you could feel better.

The red lines signify that your body had contained too much “wind”. The darker color, the worst you got sick. But medically, it shows the capillary beneath your skin is broken. It won’t be dangerous if you didn’t overdo it.

Bunda used to do kerok message with union and cajuput oil. I think it is safer than using coin and balsam, but with the same healing result.

Not like Thai massage, Indonesian massages usually involve some oil. The oil makes the massage works very deeply to ease muscle and joint paint. The deep thump pushing to each muscle has a purpose to give thorough stimulation to the soft tissues.

The oil is strongly therapeutic and has a beneficial effect on body’s circulation. Some message practitioners apply coconut oil, olive oil, cajuput oil, musk oil, clove oil, bee oil. They are warm and hot enough to widen the artery beneath the skin. It makes blood circulars easily and decreases the pain.

Actually, it’s not the real Balinese massage, because all of the healing techniques originally came from the Majapahit Kingdom, in East Java Province.

Some techniques commonly found in Balinese massage are skin rolling, which is grasping the skin between the fingers and thumbs, and rolling the skin while moving the hands. And by fingers, he/she pulls up the muscles quickly, then releases and cups the hands whilst drums them over your back areas.

The Balinese massage also love to “crack” the neck, fingers, and toes. It's more similar to Indian street massage.

But the unique massage of Bali was inspired by Kecak dance of sliding the elbow along the side of the spine whilst shaking the hand thus vibrating the back. It looks scary, but actually is quite pleasant.

So, which one you will choose to re-energize your body? As long as massage give a good effect for your body, you can do massage. But sure, you have to choose the right one for your health.